The 45th year of Knott's Scary Farm began this past weekend, much to the delight of eager fans. Opening night typically comes with jitters, yet none were to be found. This is the strongest event we have seen in some time. From new and re-imagined mazes, to energetic talent, to better-than-ever shows, this year is off to a crowd-pleasing start.

In terms of Scare Zones, Ghost Town always reigns supreme. It is the birthplace of Halloween theme park events, and it never disappoints. Main Street is darker and foggier than ever. Despite construction, Carnevil’s energy has been amped up. The talent here never disappoints, and they were up to their usual shenanigans all weekend. Fiesta de los Muertos lost its DJ, but not its energy. Talent were chasing people of all ages through the scare zone from every direction. At one point, we stopped and ate a plate of carne asada fries from La Papa Loca (delicious, BTW… Knott’s has the best carne asada) and watched it all go down for about twenty minutes. Most improved this year is "The Hollow." New lighting, fog, and props added much needed atmosphere. Pop-up, unscheduled shows add reason to stick around. Make sure and watch the burning of the Wicker Man at midnight above the cave bridges.

Sadly, this will be the last year of performances by Elvira Mistress of the Dark at Knott's. This year's show is by far her best since her return for the 40th. She looks as good as ever on stage and the show is filled with high energy dance numbers, sexy performers, and Elvira’s signature comedy. The plot bids here a silly farewell, with a grand finale number you will not want to miss. Scary Farm's signature show "The Hanging" has been a hit or miss the past few years. Not so this time around. It fires on all cylinders. From hilarious pre-show tweets, to song and dance numbers... nothing, and no one is safe from ridicule. Make sure and schedule both shows into your visit.

Despite larger than expected crowds opening weekend, lines moved smoothly and efficiently. One of the biggest complaints of these types of events is having to wait in line. They are to be expected. Queueing the masses and moving them through the mazes is a daunting task. You want a constant flow to keep the lines moving, but not so much so where they back up, or move so quickly scares are lost. One of my major complaints about Halloween Horror Nights are the lines. The park feels like one giant queue. Despite their best efforts, my experience has been severe backups in the mazes and triple digit wait times. This is not the case at Knott's. Flow and line control is handled the best it possibly can considering space constraints, crowds, and the occasional unruly guests.

In terms of mazes, there are nine this year, and one ride overlay.

New mazes: Dark Ride (10/10) (Boardwalk Ballroom) By far one of the most detailed and most impressive mazes Knott’s has ever done (or any other theme park, for that matter). Guests journey through an abandoned carnival dark ride where evil has taken place, and unsavory characters still lurk. The design is ingenious. Guests are greeted by a hobo, warning you not to enter. As you make your way through the maze, you weave in and out of the show. One minute you are on the ride’s track, the next minute, you are behind the scenes. When you reappear on the track, you are on the other side of the swinging doors of the ride (think Disney dark rides in Fantasyland). Hopefully, this concept is not lost on the causal parkgoer, as it is incredibly executed. Not to mention, the theme matches perfectly with the scare zone! Pumpkin Eater (10/10) (Camp Snoopy) Another maze that fits in with its surroundings in The Hollow (Camp Snoopy), is a sadistic take on a popular fairy tale. Guests enter the queue and see a charming village, but what awaits past the ramp in is anything but cute. Encounter Peter and travel through his sick world, and into the guts of a pumpkin. Trick or Treat (7/10) (Backstage) The only let down this year (if you can call it that), is with this recycled maze. Much of the layout is the same as previous years, with only a few scenes changed, and new rooms added to the end. The lights have been turned out, and guests are given a flashlight to navigate the Green Witch’s house. The flashlight itself is interactive and will turn on and off, and even turn into a backlight. The experience was cool, but maybe a bit overhyped.

Returning mazes: Voodoo (8/10) (Backstage) Still a solid maze. To change things up a bit, you now enter through the back, making the cemetery your first stop. You exit through what used to be the front entrance. Some said the story was lost traveling through in this direction. I disagree. Had you never entered through the voodoo shop and left through the cemetery, this direction would make perfect sense. Paranormal, Inc. (9/10) (Backstage) Basically the same maze. Knowing a lot of the talent from previous year, actor’s roles have changed, and/or they have moved on to other locations, such as Ghost Town Streets. The experience is still unlike any other, with several effects, that you will not find anywhere else. Tooth Fairy (7/10) (Backstage) No visible changes, with the exception of the finale. The bedroom and mechanical tooth fairy has been replaced with a live actor (sorry, spoiler!). No disrespect to the talent in the room, but I preferred the old ending better. This was too dark, and didn’t feel complete.

Red Barn (10/10) (Wilderness Dance Hall) Wow! Major improvement here. This is the second year for this maze. The story, scares, and gore have been amped up. Make sure and read the creepy writing on the walls. If that doesn’t give you chills, I’m not sure what will. Infected: Special Ops (10/10) (Mystery Lodge) This interactive maze/experience sets the gold standard for what other theme parks should be doing. There are a lot of scenes and impressive props within the maze. You are ushered through quickly, while killing zombies (head shots only!). If anything was new, I was too engrossed in the task at hand to notice.

Shadowlands (10/10) (Xcelerator) I have said it several times already in this review, but Knott’s sets the standard, and nowhere is that truer than in this samurai-themed maze. Forget the scares (which there are plenty of), simply walk through it to see the detail and set pieces. Ride overlay:

Halloween Hootenanny (9/10) (Timber Mountain Log Ride) As an added bonus, a Halloween-themed overlay has been given to the Timber Mountain Log Ride. While props are up during the day, live monsters are added at night. The ride also features a special soundtrack performed by the park’s Krazy Kirk and Hillbillies. This is a fun, much needed addition. Do not pass it up!

There were no duds in terms of mazes this year, only improvements. Everyone was on their game inside, and the designers have outdone themselves. Coming up with new and creative ideas each year, without the assistance of popular television shows and movie franchises shows the creative genius of the Scary Farm staff. In a media preview, it was said that the star attraction of Scary Farm is the park itself. This is very true. From the second you step foot inside the gates at Knott’s Berry Farm, you are immediately immersed in Halloween. Pop-up shows around the park, interactive characters, and special effect lighting add to the atmosphere. From the decorations, to the music, to the fog, to the talent… Halloween is everywhere. This is something no other park can replicate, and something most don’t even try (Horror Nights, cough, cough). This is exactly why media night is just the first of usually a dozen plus visits I make to Scary Farm each year. Often, I will simply find a bench, sit down, and soak it all in for hours. No one does it better. No one. Oh… and make sure to see “Mad” Eye Joe in Ghost Town. He’s a bit snarky, a lot sarcastic, and frankly, downright rude. You’d be pissed too if you had been sitting in that jail for decades, forced to talk to guests stuffing their face with funnel cake. I love it! 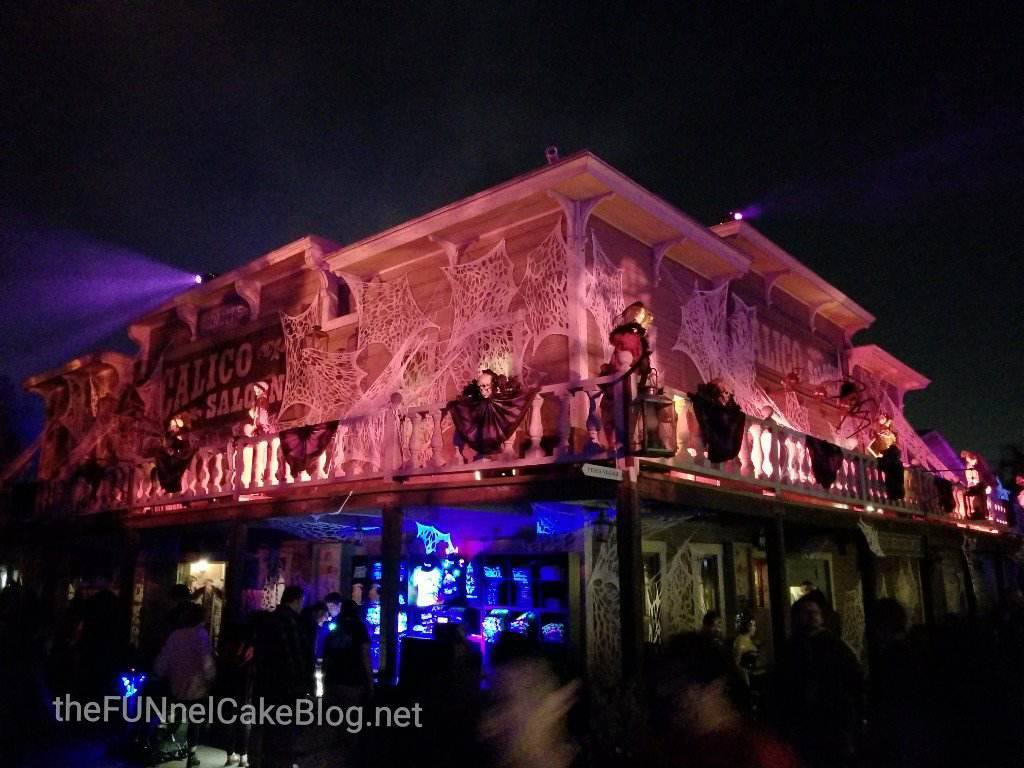 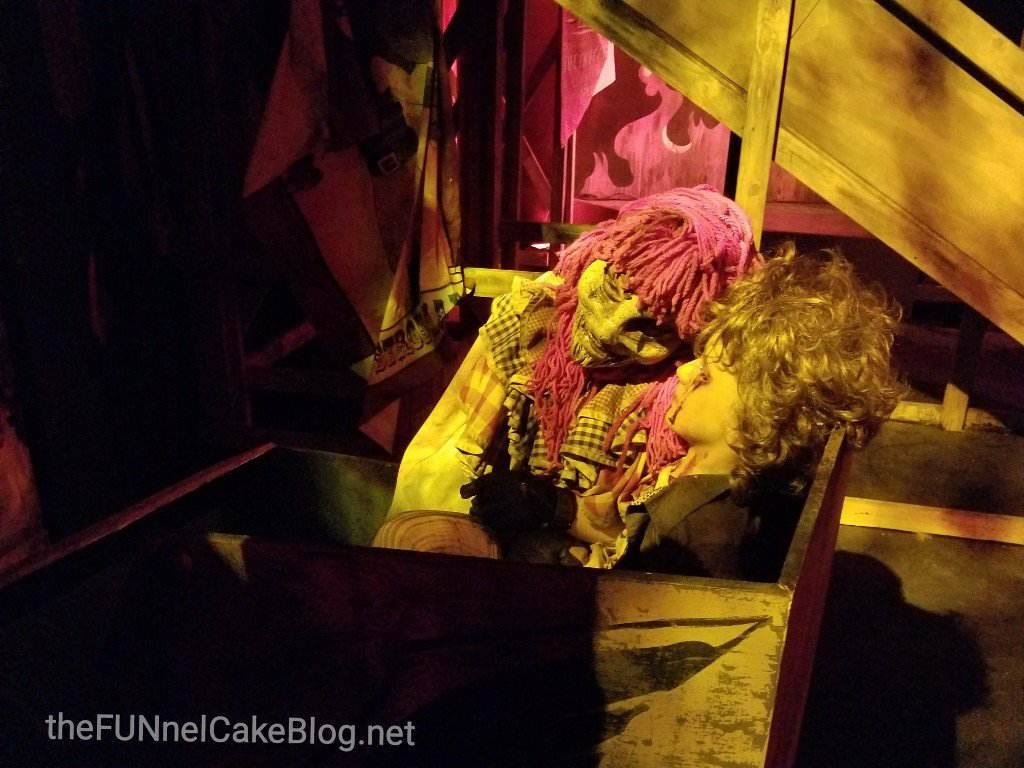 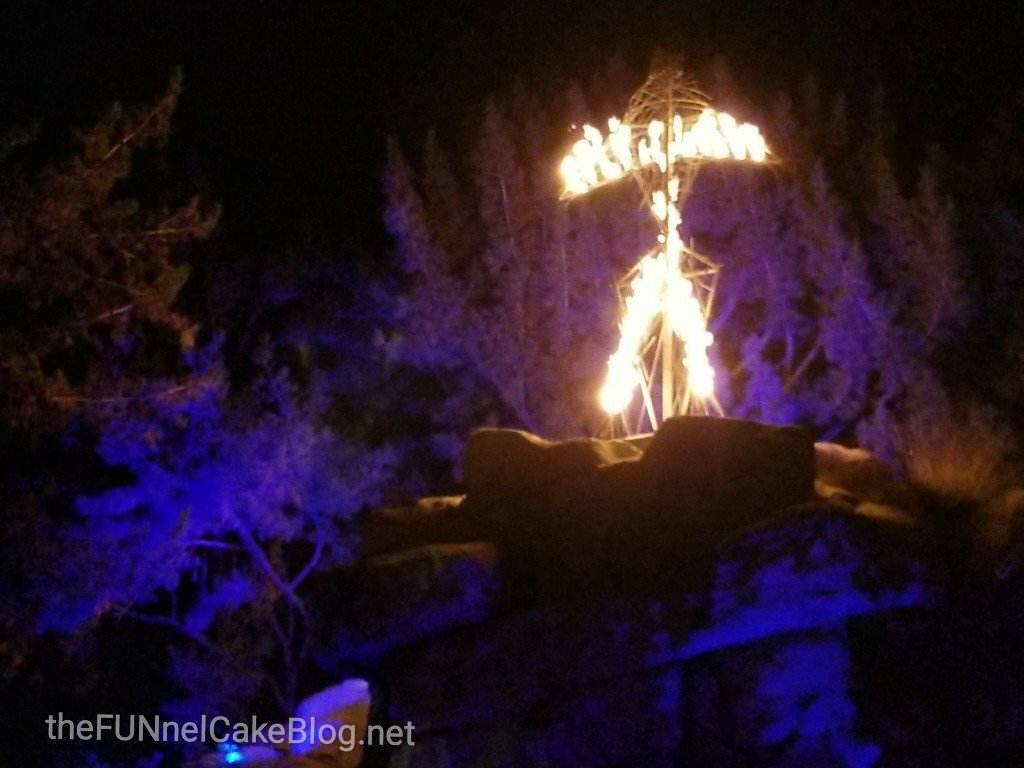 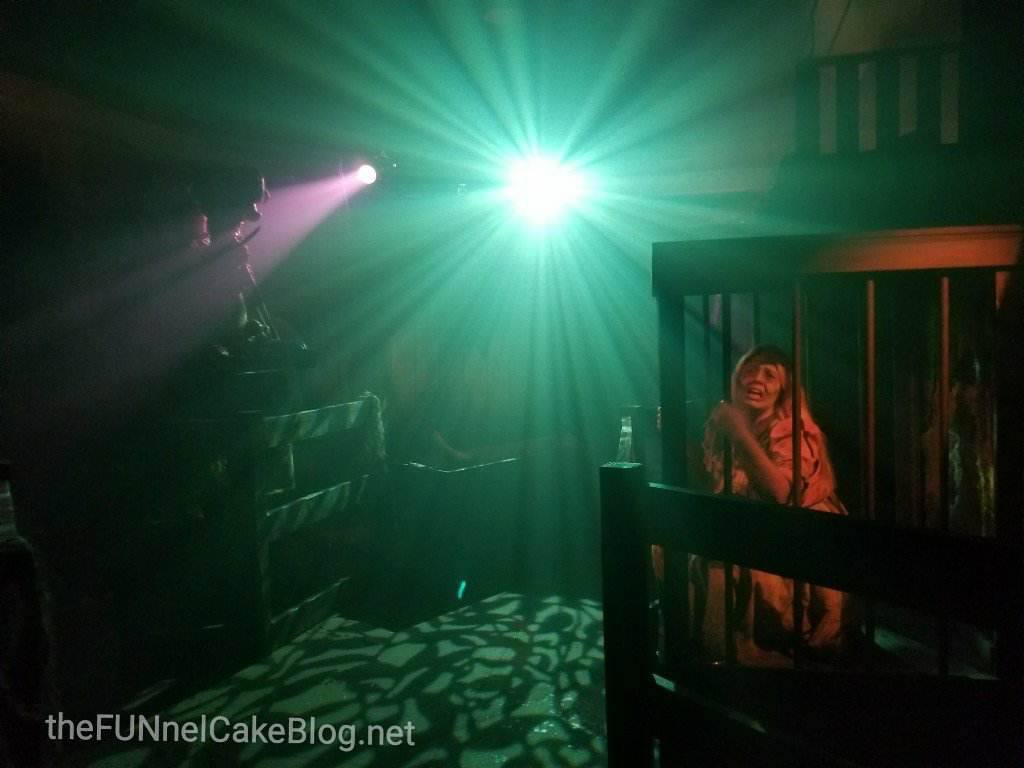